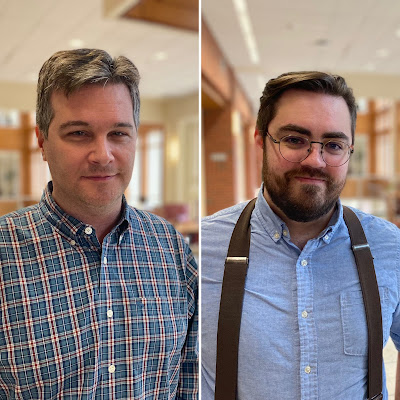 Day in and day out, faculty in the Gallogly College of Engineering at the University of Oklahoma create research opportunities for their students. Dimitris Diochnos (photo, on left), an assistant professor in the OU School of Computer Science, has helped a student do just that.

In February, “Wind Prediction under Random Data Corruption” was showcased during the Conference on Artificial Intelligence (known as AAAI-22) sponsored by the Association for the Advancement of Artificial Intelligence. Over 40,000 researchers, practitioners, scientists and engineers took part in the virtual event Feb. 22-March 1.

The paper was co-authored by Diochnos’ former student Conner Flansburg (photo, on right) whose work was initially supported by the Research Experiences for Undergraduates program funded by the National Science Foundation.

Joining OU in 2019, Diochnos serves as senior personnel for the NSF AI Institute for Research on Trustworthy AI in Weather, Climate and Coastal Oceanography. His work examines foundational issues related to the robustness and reliability of machine learning algorithms that have applications to environmental sciences. In 2021, he published at another noted conference. “Learning Reliable Rules under Class Imbalance” was accepted at the Society for Industrial and Applied Mathematics International Conference on Data Mining.
Flansburg earned a bachelor’s degree in computer science in 2021. In February, the Broken Arrow native joined Pacific Northwest National Laboratory as a researcher in software engineering.

In 2020, OU received a $20 million grant to lead the NSF AI Institute for Research on Trustworthy AI in Weather, Climate and Coastal Oceanography. Amy McGovern (photo, right), an OU professor with dual appointments in the School of Computer Science in the Gallogly College of Engineering and in the School of Meteorology in the College of Atmospheric and Geographic Sciences, is the director. At AAAI-22,  she was an invited speaker for the AI Institutes' seven-member panel.

Learn about the Gallogly College of Engineering.

Popular posts from this blog 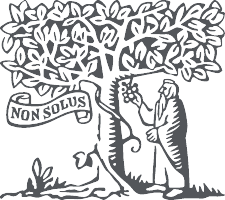 A prestigious list published by Elsevier, an international information and analytics company, has recognized 19 engineering faculty at the University of Oklahoma who are using their research expertise to create solutions for the world’s toughest challenges. Titled “Standardized Citation Metrics Author Database,” the list is updated yearly and is thought to be the only large-scale database that systematically ranks 100,000 of the most-cited scientists in the world.  “For more than 20 years, this database has been one of the few that ranks a researcher’s impact in their scientific field,” said John Klier, Ph.D., dean of the Gallogly College of Engineering. “The list is an indication of the very positive impact engineers and scientists are making in the world through dedicated research and commitment. I’m extremely pleased to see so many of our engineering faculty recognized.” A publicly available database can be found at updated science-wide author databases of standardized citation indi
Read more 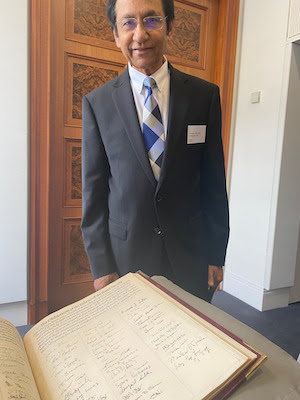 Over the years, Thirumalai “Venky” Venkatesan, a University of Oklahoma professor in the School of Electrical and Computer Engineering , has received many prestigious honors and awards for his achievements in advanced technology innovation.  This year, Venkatesan has received four such honors.  On June 24, Venkatesan traveled to London for an invocation ceremony where he was inducted as a Royal Society Fellow . The distinguished group comprises 1,700 Fellows and Foreign Members, including 85 Nobel Laureates who were all selected for exceptional contributions to science. Venkatesan joins the ranks of Stephen Hawking, Isaac Newton, Charles Darwin, Albert Einstein and Dorothy Hodgkin.  "The ceremony was a 1 1/2-day event and will forever remain in my memory as very special," Venkatesan said. "I signed the same book as Michael Faraday and Isaac Newton, two of my heroes!" he added.  Top photo, Venkatesan with the Royal Society's charter book that was created in 1663.
Read more

Five students in the Gallogly College of Engineering at the University of Oklahoma have been selected as 2022 National Science Foundation Graduate Research Fellows.  The fellowships provide students with a three-year annual stipend, allowance for tuition and fees, and access to opportunities for professional development available to NSF-supported graduate students.  “We are very proud of our engineering students who received an NSF fellowship. Each of these scholars is committed to conducting research that will broadly impact Oklahoma, our nation and our world. The award will help each of them become a leader who will contribute to scientific innovation and teaching,” said John Klier, Ph.D., the college’s dean.  Clayton Blosser, of Norman, Oklahoma, is working toward a master’s in electrical engineering with an anticipated graduation date of May 2022. He works as a research assistant at the Advanced Radar Research Center and serves in leadership and outreach positions for IEEE’s honor
Read more