Showing posts from March, 2012
Show all

Engineering Smart Embankments and Other Earthwork 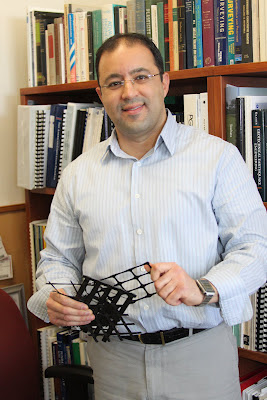 OU College of Engineering Researchers to Receive National Award NORMAN, Okla. – University of Oklahoma College of Engineering researchers are being recognized for their research in the field of civil engineering, specifically how a new generation of polymeric products used in geotechnical projects (called Sensor-Enabled Geosynthetics, or SEG) could help monitor deformations in such earthen structures as embankments and retaining walls as they happen. Kianoosh Hatami, Brian P. Grady and Matthew C. Ulmer will accept the Thomas A. Middlebrooks Award in March at the American Society of Civil Engineers’ Geo-Institute annual conference in Oakland, Calif. The award recognizes peer-reviewed, technical papers worthy of special commendation of merit as a contribution to the field of geotechnical engineering. “Landslides and slope failures along roads, highways, and other public and private properties in the United States cost taxpayers hundreds of millions of dollars annually. An important
Read more 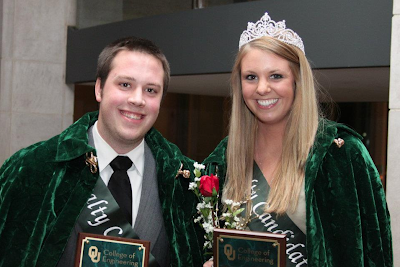 By Karen Kelly OU College of Engineering NORMAN, Okla. – Feb. 19 to 25 is a special week in the life of engineering students, engineers in the workplace and government agencies. National Engineers Week, created in 1951 by the National Society for Professional Engineers, is an annual celebration scheduled in conjunction with President George Washington’s birthday; Washington is considered an engineer because of his competency as a surveyor. No, it wasn’t St. Patrick’s Day yet, but it looked like it, as everything was coming up green shamrocks at the University of Oklahoma. E-Week enjoys a rich tradition here, transplanted in1914 by a new member of OU’s faculty from the University of Missouri at Columbia, where the Irish influence began. Senior architectural engineering student from Oklahoma City and E-Week chair, Alyse Burgess, led the 2012 E-Week festivities. The week-long celebration featured record-breaking participation by OU engineering students in events that included a Roa
Read more 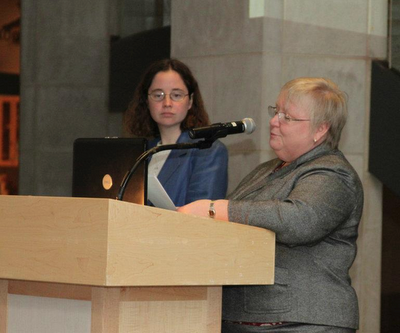 NORMAN, Okla. – National, regional and educator awards were presented to Oklahoma high school students and an educator by the National Center for Women and Technology during a banquet held Feb. 25 at the Sam Noble Oklahoma Museum of Natural History. The banquet culminated a week-long celebration of National Engineers Week at the University of Oklahoma College of Engineering. The National Center for Women and Technology annually presents national and regional Awards for Aspirations in Computing to high school girls and educators who are interested in computing. The national winner received a $400 cash prize from the Oklahoma Experimental Program to Stimulate Competitive Research, along with the prizes awarded to the regional winners. Regional winners received a $200 award from EPSCoR and a $250 prize from the OU College of Engineering and the School of Computer Science. Receiving regional awards were: • Brooke Daugherty, a high school freshman from Gracemont, who hopes to attend
Read more

Graduate students show off research and artwork at competition 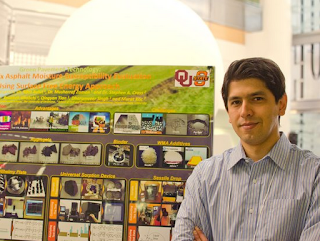 OU Daily Sam Higgins, Campus Reporter | March 4, 2012 Photo by Sam Higgins Rouzbeh Ghabchi, civil engineering and environmental science graduate student, stands next to his presentation, Environmentally Friendly Asphalt Technologies for Pavement Applications, during the Student Research and Performance Day Friday in the National Weather Center. Ghabchi's reaserch is focused on finding cheaper and more environmentally friendly methods for laying asphalt. Graduate students presented their research Friday to judges in an effort to win money and have their research evaulated by OU faculty, staff and undergraduate students. The Graduate College Student Research and Performance Day held at the National Weather Center divided graduate students into four divisions: Education and Fine Arts and Humanities (which is one division), Engineering, Science, and Social Science. The students in each division presented their research or artwork to three judges. Each of the four d
Read more
More posts